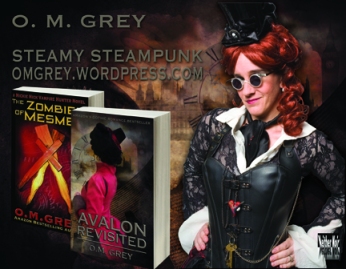 Today my alter ego O. M. Grey launched her Kickstarter Project Campaign to raise publishing funds (and get a new podcasting mic). Please take a look at the project and the little vlog she made for the campaign.

She’s got some great rewards like free eBooks, author signed books, a mention in the acknowledgements, a book dedicated to you, a cameo appearance in her new WIP, a fully developed character in her new WIP, and a private party with her and 30 of your friends.

The following is taken from the kickstarter project page…

The cost of publishing print books is unfortunately quite high, and so I’m requesting the patronage of readers to help offset those costs for the printing of The Zombies of Mesmer as well as the printing of my forthcoming anthology Caught in the Cogs (December 2011 release), which will consist of several short stories, poetry, and a selection of relationship essays. Publishing costs consist of hiring a cover artist, professional editor, layout costs, setup costs, and printing/shipping costs.

This kickstarter campaign is to raise money to print the two above titles, a third as yet untitled WIP “new novel” to be released early 2012 (unless NY picks it up!), and to buy a new podcasting microphone/headphones for higher quality podcast recording.

Please listen to my podcasts over at http://omgrey.wordpress.com and comment on the blog posts. I do so love to chat with readers throughout the week.

By donating funds to these projects you will not only get a chance to receive one or more of these titles before they are available to the general public (and signed by me), but you also have the opportunity to be a part of the creation itself if you choose to become a character in the new WIP novel.

If I surpass my project goal, the remaining funds will assist in travel and lodging to the many Steampunk Events I have planned next year, bringing me closer to my readers and meeting new ones. So far I am confirmed as a literary guest at HRM Steampunk Symposium and Clockwork Con in January 2012, Anomaly Con in March, and Aetherfest in May. I plan to also return to the Steampunk World’s Fair in NJ as well as make an appearance at World Steam Expo in MI. There are over twenty Steampunk conventions in 2012, and it is my goal to attend as many as will have me. Hope to see you there!

If you are new to the term STEAMPUNK, please learn more about this beautiful aesthetic at Wikipedia. I write “Steamy” Steampunk with a twist of the paranormal.

This campaign ends on my birthday, and I can think of no better gift than the support from my fabulous readers.

This is so cool! Perhaps Ethan and I will do something similar for publishing POWER OF THE ZEPHYR, Book 4 in the Rowan of the Wood fantasy series. Scheduled for an early 2012 release.